Home About Us FAQ Français

Home
About Us
FAQ

Your investor profile is incomplete. You need to complete your profile in order to read the investment docuemnts, purchase stock in your own name or purchase stock on behalf of your minor children.
Complete my profile

As part of the AMF recommendations, we request you update your investor profile in order to access the investment documents and to purchase shares in your name or on behalf of your minor children.
Complete my profile

Purchasing options for another person is no longer possible. You may still invest for yourself or redeem a gifted box while this campaign is live.
Close

Boulogne: an architectural gem one hour from Paris

The Château de Boulogne, this astonishing castle haunted by the ghosts of the Great War, nestled in the middle of a forest that has not yet revealed all its secrets, invites the visitors to dive into the heart of its mystery....

After the success stories of the campaigns of the Mothe Chandeniers, l’Ebaupinay, and Vibrac, a new adventure awaits all of those dreaming of owning a part of a French castle. For 59 €, you can become co-lord of this giant at the gates of Paris !

FOR CHRISTMAS, BECOME A SHAREHOLDER OF THE DOMAINE DE BOULOGNE WITH THE GIFT BOX!

Treat yourself or a loved one to a share of the castle: you will receive a box containing a numbered card that will make its owner a co-lord of Boulogne! Buy it now to ensure on-time delivery for Christmas!

a dreamlike castle lost in time

At the end of the 19th century, Charles de Boulogne, a Belgian owner, bought the title of Count and had a colorful fortress built in Boulogne-la-Grasse, on the remains of the Lancry family castle. In this unique creation of his, the profane and the sacred, images and ideals, esotericism and history will mingle in a surprisingly harmonious way...

The reinforced concrete frame allowed the Count to build a solid structure within short deadlines, and above all to give free rein to his imagination from sculptures of saints, gargoyle masks, Gothic inspirations, Roman motifs and Arthurian references to Latin inscriptions.

This place of innovative construction for the time and dreamlike atmosphere became a real attraction before the war. Numerous postcards of the castle have been printed, a testament to the popularity of this unlikely tourist attraction.

It even received praise from the national press. The famous and as of today almost bicentennial French newspaper, Le Figaro, applauded the fantasy of this already unique castle in its October 24, 1908 edition: "Gothic and Romanesque, Devil and Saints, legend and history, Church and chivalry, fraternize in stone. Castle of the marvelous mystical dreamed of in the enchantment of the ages of faith, which, with his magical outline, the brilliant sculptor awakens from the depths of centuries ”.

the legacy of the great war

A few months after the start of the Great War and after the first victory of the Marne, the front moved to the Oise departement. The castle, whose high tower offered, at the time, a breathtaking view as far as Amiens (40km), was requisitioned by the French army.

Offering a situation close enough to the front line and far enough away not to be directly threatened, it became a stationing and observation camp for the French soldiers. In this unusual place, for four years, hundreds of men trained, wrote, ate, slept, and above all tried to survive this incredibly deadly conflict. After the invasion of Belgium in 1914, the soldiers received a visit from Marshal Joffre, President Poincaré, and King Albert I. A plaque commemorates this visit at the entrance of the castle.

And although the then-President didn't seem to have a soft spot for the Château's eccentricities, the French soldiers seemed to have enjoyed their stay; posterity has left us some beautiful photos of these men, posing among the sculptures in the park.

In the spring of 1918, Germany only had a few months left to triumph over the Allies before the arrival of the American expeditionary corps. The landing of these millions of members of the Triple Entente would indeed put an end to the German hopes. The German high command launched a large number of brutal attacks and Boulogne-la-Grasse was not spared. The village and its castle were bombed and taken by the German army during the fighting around Montdidier, on March 27 and 28, 1918.

The French cannons in turn strafed the castle, which the French soldiers took back on August 10, 1918, a few months before the end of the combat.

These six months of intensive fighting left indelible marks. It took nearly twenty-five years to rebuild parts of the castle and its outbuildings. The scars of the Great War are still tremendous. For its sacrifice during the war, the entire commune of Boulogne-la-Grasse received the Croix de Guerre (War Cross) on February 21, 1921.

Becoming a co-lord for €59 is now possible!

The magical castle of Boulogne, only one hour from Paris, is now at your fingertips!

With your investment of 59 euros, you will become a co-chatelain (co-lord) shareholder holding one part (one share) of the SAS Châteaux Merveilles, future 100% owner of Château de Boulogne.

Like tens of thousands of people around the world, you will have the opportunity to become part of a tight-knit community of castle saviors!

Do you want to give a share to a loved one? It's possible! In this case, you need to purchase a gift box. The card inside which will allow you to pre-pay the share.

Your loved one (or yourself, if you want to treat yourself to a gift box), can become a shareholder without spending a dollar by using the number on the card.

This simple and secure way allows you to turn your loved ones into real co-lords. Who has never dreamed of owning a share of a magical French castle for Christmas?

Every investor will enjoy the aforementioned co-lord privileges, regardless of how many shares they hold. However, owning more than one share will give co-lords additional privileges.

Of course, buying more shares is a way to ensure the project is even better funded and thus more able to speed up its restoration and economic development.

The wonderful community of volunteers is the cornerstone of our crowdfunded acquisition projects. Through the workcamps that we will organize next year, the whole project will be put in place and collectively defined.

Located just an hour from Paris, this project is an opportunity for those who can and who want to participate even more directly in the preservation of our heritage. It’s also a fantastic human adventure, as the enthusiastic volunteers of the Châteaux de la Mothe Chandeniers, l’Ebaupinay and Vibrac confirm time after time.

The estimated costs presented below take into account the work of our valiant volunteers.

The project for the economic development and restoration of the Château de Boulogne will be carried out in successive stages. Each reached milestone will unlock the realization of additional elements of development and/or restoration, in order to tightly control the project's budget.

The ravages of time and the shells of the Great War have left significant marks on the building of the castle and its outbuildings. The main areas of restoration are the following :

Live a timeless moment in a castle full of mysteries

The financial model of the project is centered around three themes: unique visits, atypical accommodations and private bookings.

Tours will complement the visitors' free wanderings in the park, on the edge of the adjoining forest. Everyone will be able to discover the many references and winks left by the fantastic Charles de Boulogne and the soldiers of the First World War who stayed there.

The redevelopment of the interiors of the castle will also offer visitors the possibility to discover even more unexpected treasures of the Château de Boulogne.

The installation in the forest of eco-lodges, responsible and autonomous housing, will offer exceptional accommodations one hour from Paris. Nature lovers will have the opportunity to discover the peaceful neighboring forest and the Château from another intimate angle.

Finally, the installation of equipment (electricity, parking, pipes) to organize events and celebrations is also to be funded. These elements will transform the Château into a place suitable for private events as well as end-of-year celebrations, tributes from the Great War, etc.

To make the domain of the Château de Boulogne a unique and economically profitable tourist site is the project we are proposing to you today, as we have done for the châteaux of Vibrac, Ebaupinay and La Mothe Chandeniers.

By becoming a shareholder of the Château de Boulogne, you are investing in an extraordinary project that combines a passion for heritage preservation and economic development.

Dartagnans is the leading French startup in innovative financing dedicated to the preservation of heritage through: collective purchases of castles, participatory financing and its online ticketing service Dartngo, organizer of the national event La Nuit des Châteaux.

Dartagnans and collective purchasing is:

Questions about how the investment works?

Can I invest for a relative? For my minor child ? What do I gain by investing in this project?  What does being an investor mean for me and what are the risks? We answer all the most frequently asked questions in the document below:

A box is a box that allows you to offer a future share to someone or to yourself. It is the physical object through which you can securely transmit a company share purchase order.

A company share purchase warrant is a means of conveying a claim subscribed by an investor in a company's project to a third party (or to yourself) in order to enable him to invest in the company.

In order to secure this transfer, Dartagnans creates boxes containing unique numbered cards and a code system that allows the offerer to safely transfer a share to a beneficiary. The beneficiary will have to complete the steps indicated in the box in order to become a full-fledged co-chairman, but will not have to pay anything.

Contact our team via the form, choosing "Château de Boulogne" as a theme, we will answer you as soon as possible.

TOGETHER, LET'S RESURRECT BOULOGNE, A FAIRY TALE CASTLE, WITNESS OF THE GREAT WAR

Thank you all for your support!

Warning: investments present a significant risk of partial or total loss of capital as well as a risk of illiquidity.

If you have any questions about the risks associated with investing, you can consult the paragraph dedicated to the FAQ: Being an investor, what does it mean for me and what are the risks? 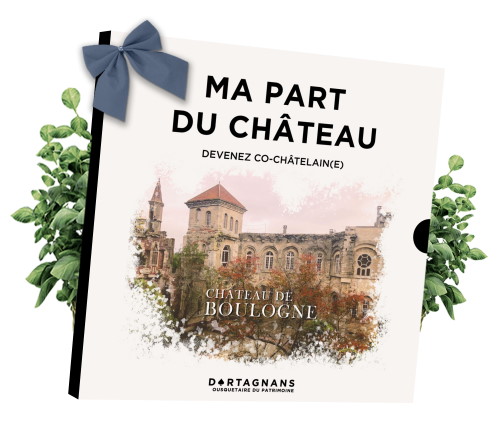